According to Lauren Bravo’s book, How to Break Up with Fast Fashion, we only wear 10-20 percent of the clothes in our closets on a daily basis. Patrick Robinson—a designer who has transformed global brands such as Giorgio Armani, Perry Ellis, and the Gap—has made it his mission to change how we approach consumerism and our closets. Worth sat down with Robinson to discuss the deep-seated issues of exploitation and excess in the fashion industry and how his regenerative brand, Paskho, is changing fashion’s landscape.

Read more at
Worth
Read more... 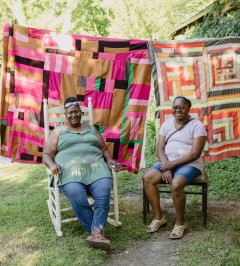 Gee’s Bend is a tiny, isolated rural hamlet in Alabama, USA. Located in a literal bend in the Alabama River, the community is almost completely surrounded by water geographically and culturally disconnected from so much of the rest of the world. Many of its African-American community, who number less than 1,000, can trace their descendants back to slaves from the cotton plantation established at Gee’s Bend in 1816. 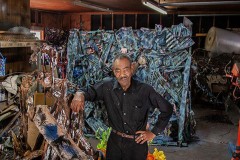 October 19, 2022
Sometimes, the home folks are the hardest to impress. Long after the wider world has opened its arms, home folks continue casting a leery eye. Alabama’s Thornton Dial Sr. (1928–2016) had his first solo museum exhibition jointly presented by the New Museum and the American Folk Art Museum in New York in 1993. His work was featured in the 2000 Whitney Biennial. In 2005, the Museum of Fine Arts, Houston gave him a solo show. In 2011, another solo presentation visited the Indianapolis Museum of Art, the New Orleans Museum of Art, the Mint Museum in Charlotte and Atlanta’s High Museum of Art.
Read more at
Forbes
Read more... 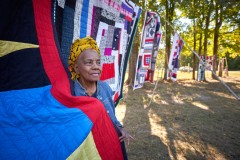 The Airing of the Quilts: Boykin quilters celebrate centuries of tradition

October 13, 2022
Unlike her mother, grandmother and generations dating back to the 1800s, Louise Williams does not quilt. When she was younger, her refusal to carry on the tradition was an act of rebellion, breaking the bounds of what was expected of her. Instead of working in the Freedom Quilting Bee cooperative, sewing pillow shams for Sears Roebuck and quilts for collectors, she went to school and left the state. “I barely can put a button on or sew a hem. That was something that escaped me,” Williams said. “But this was always home.”
Read more at
Montgomery Advertiser
Read more...

Why Gee’s Bend quilters are headed to Marfa

The abstract quilts made by generations of women in Gee’s Bend, Alabama, have lately received overdue recognition from the art world: exhibitions at the Whitney Museum of American Art, a major acquisition from the Met and auction prices above $50,000. But this reverence had not translated into financial prosperity for many makers until recently, with non-profits Souls Grown Deep and Nest now working to help expand their opportunities. 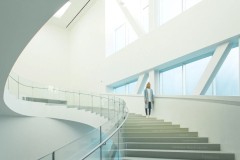 Museum Boards And Donors Need To Examine Where Endowments Are Invested

It’s no secret that museums face increased scrutiny for both the company they keep and the promises they make. In recent years, eye-catching demonstrations by artists have thrown major gifts from “tainted” sources into sharp relief, suggesting museums themselves should be mindful of how they make their money. In the wake of the Black Lives Matter protests, museums made strong public commitments to the values of diversity, equity, and inclusion—but two years later museum workers have questioned whether actions reflect words. One way that museums can strengthen their reputations and follow through on their public declarations is by aligning the billions of dollars in their endowments with their values and missions.

Read more at
Worth
Read more...

Gee’s Bend Quilting Comes Into Fashion, but How Are These Brand Partnerships Working for the Artisan Community?

When Gee’s Bend quilting makes its way to the Met Gala — courtesy of a Greg Lauren jacket worn by Questlove — fashion is definitely paying attention. While the historic quilt work from the small Black community that’s still known to residents as Gee’s Bend (though it’s officially Boykin, Alabama) has been tradition since the 19th century, a wave of recent brand collaborations has brought the rural community to the runway. 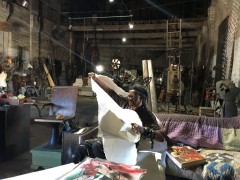 Step Into the Jam-Packed Studio of Lonnie Holley, Whose Latest Works Include Ceramics and Musical Compositions

Since the beginning of 2022, Lonnie Holley has been preparing for three solo shows: two currently on view at Dallas Contemporary and Edel Assanti in London, and one opening next month at Blum and Poe in Los Angeles. Holley also spent several weeks in February in rural England composing a new song cycle, “The Edge of What,” for Artangel. Timed to the Edel Assanti opening, Holley staged a one-night performance of the music at London’s Stone Nest last month. (Artangel also made a 25-minute film of the artist at work at the Orford Ness nature reserve, a former military testing site on the Suffolk coast.) 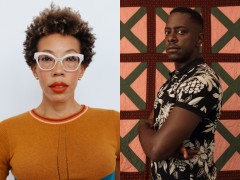 Souls Grown Deep Foundation and Community Partnership announced today that Sanford Biggers and Amy Sherald have been elected to its Board of Directors, joining an eminent group of artists, scholars, curators, activists, and nonprofit and philanthropic leaders. Both artists have strong connections to the communities and artists for whom Souls Grown Deep advocates. Sherald is a painter celebrated for her portraits of contemporary Black American life, and found inspiration in a dress design with echoes of Gee’s Bend quilts for her 2018 official portrait of former first lady Michelle Obama. Biggers is an interdisciplinary artist with quilters in his own family history, for whom Black Southern quilt making – and Gee’s Bend in particular – has been a driving creative influence, with repurposed antique quilts serving as a prominent medium and motif throughout his career.

A life saved by art: Lonnie Holley on making work inspired by trauma, 'garbage'—and being stranded on an English island

In the 1990s, Lonnie Holley wrote an autobiographical sketch, a stream-of-consciousness memoir of extreme poverty and hardship. Early in the text, he writes about a woman who took him away from his mother as an infant before, when he was four, “the lady sold me to another lady for a pint of whiskey”. The trauma that follows is relentless, including physical abuse, horrific racism and exploitation and jail time, before his life was saved by art. Now, he is widely celebrated for both the sculptures he initially made from found objects in his yard in Birmingham, Alabama, and, more recently, his performance practice, based on improvised voice-and-piano compositions—impressionistic, autobiographical and deeply moving.