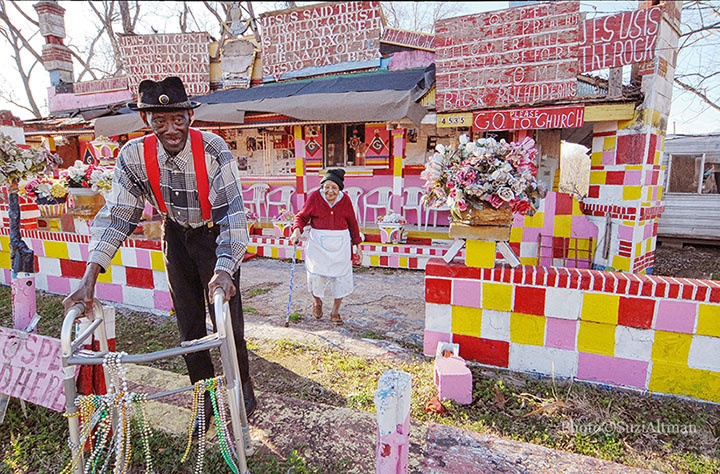 It all started with a promise. “He asked me would I marry him,” Margaret Rogers Dennis recounted years later of Reverend Herman Dan Dennis’s proposal to her in 1984. “I wasn’t exactly sure. But he said, ‘If you’ll marry me, I’ll turn your little old brown plank store into a palace.’” The reverend kept his promise. He turned the old run-of-the-mill grocery store that Margaret ran with her first husband, who was tragically killed in a robbery at the store, into a colorful mecca where “ALL IS WELCOME JEWS AND GENTILES.” Multiple towers made of cinder blocks painted red, blue, pink, and yellow decorate the property, and the main building itself — the grocery — is similarly painted in multicolored squares and rectangles. Many liken the overall effect of these geometric blocks of color to a religious “Lego fortress,” but it is also reminiscent of Mondrian’s distinctive color blocking—had he ever projected his patterns over an entire property rather than a single canvas, that is. Margaret and Rev. H. D. Dennis ran Margaret’s Grocery, just north of Vicksburg, Mississippi, off of old Highway 61, as both a grocery store and a religious center, and Dennis kept operating the site after his wife’s death in 2009. He himself passed away in 2012. In far too many cases, the death of an artist like Dennis, whose creation is a full “environment,” means the end of the art environment, too. Fortunately for Rev. H. D. Dennis — and of course, Margaret, too — another promise was made.